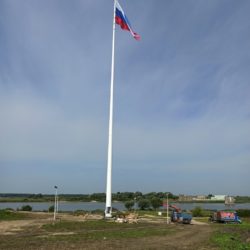 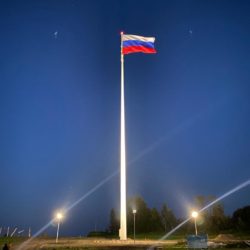 A high-masted flagpole with a height of 60 meters, manufactured by AMIRA, was installed on the Rurik Settlement in Veliky Novgorod.

The solemn ceremony of raising the national flag took place on August 22.

For the AMIRA company, the production of high flagpoles is becoming commonplace. Our flagpoles are installed in different regions of Russia and abroad. But still, each such project remains unique. But for the first time we installed a flagpole on the territory of an archaeological monument, working closely with archaeologists. This was especially important during the construction of the foundation. Specialists of the company “AMIRA-Energomontazh” (GC “AMIRA”), who were working on the installation of the flagpole, had to dig the pit very carefully and suspend work, allowing archaeologists to sift the ground.

The design of the AMIRA high-mast flagpoles is distinguished by the relatively small dimensions of the foundation, strength, lightness and aesthetic appearance. Sections of the steam are made of sheet steel by bending, followed by galvanizing and painting. Thanks to the joining of the sections of the steam of the flagpole using a telescopic connection with tension, the structure turns out to be more durable and lightweight

Spotlights for vertical illumination are installed along the perimeter of the flagpole. Thus, the flag on the flagpole will delight visitors of the Settlement not only during the day, but also at night.

We are proud to be a part of this project!

19th quarter, “Rurikovo” Settlement – an archaeological monument (IX-XV centuries) at the source of the Volkhov River near Lake Ilmen. According to the “Tale of Bygone Years”, the residence of Prince Rurik was located at this place.

In the center of the Settlement are the ruins of the Annunciation Cathedral (XII -XV centuries), which once formed a single ensemble with the St. George Monastery on the opposite bank of the Volkhov River. Since 2011, the ruins of the cathedral have been preserved, and partially reconstructed for museum purposes.

"AMIRA" at the meeting of the technical committees of the Airport Association in Minsk Prev
New lighting complexes "AMIRA" on Arbat lanes in Moscow Next
© Amira Group. All Rights Reserved. This information is not a public offer. 1991 - 2023