Construction of the final stage of the Western bypass of the city of Ivanovo has been completed. The construction of the 2.8 km long road was carried out within the framework of the russian national project “Safe and high-quality highways”.

Circular conical bent poles (series OKKLI) light built Western bypass of the city of Ivanovo in the vicinity of the airport. The highway leading from the airport is a business card of the city, so the choice of unusual lighting poles for such objects is a good solution. After all, this is not only lighting, but also the style of the city. The AMIRA Company installed bent poles (octagonal) on the roads from Pulkovo airport in St. Petersburg and Yemelyanovo in Krasnoyarsk (Siberia). On the road to Ivanovo airport, we first used a series of circular conical bent poles.

The new road to the airport has become not only lighter, but also safer. In addition to lighting poles, new pedestrian crosswalks with traffic light stands of contrasting lighting (OKSG series) have appeared on the Western bypass of the city. Recall that in 2019, AMIRA for the first time put in the city such circular traffic light stands, which perform not only the function of installing traffic lights and signs “pedestrian crossing”, but also are equipped with brackets with lamps that illuminate both the pedestrian crossing and the approach to it. This year, more than 100 such racks were installed in the city. 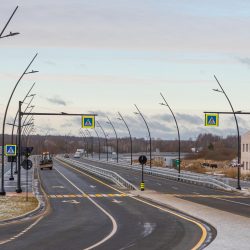 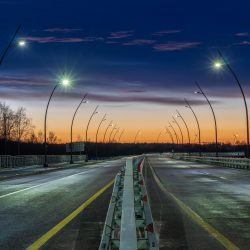 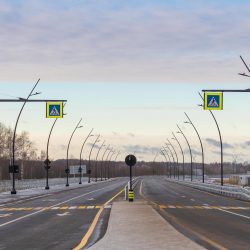 The Governor of the Leningrad Region (Russia) opened the second stage of the Megapolis plant (AMIRA Group) Prev
Merry Christmas & Happy New Year! Next
© Amira Group. All Rights Reserved. This information is not a public offer. 1991 - 2021